Why Magnetrons Fail & How To Address It
Thermex-Thermatron Systems

No component is more critical to an industrial microwave system than the magnetron. As magnetrons are also complex, they are subject to failure from a variety of causes. Operators may guard against magnetron failure by understanding those vulnerabilities. By addressing the potential risk, you can intelligently address it and, in doing so, lower maintenance costs and reduce downtime expenses.

While it sometimes is impossible for the purchaser of a magnetron to understand why the unit failed, most breakdowns observably fall into one of three broad sources: 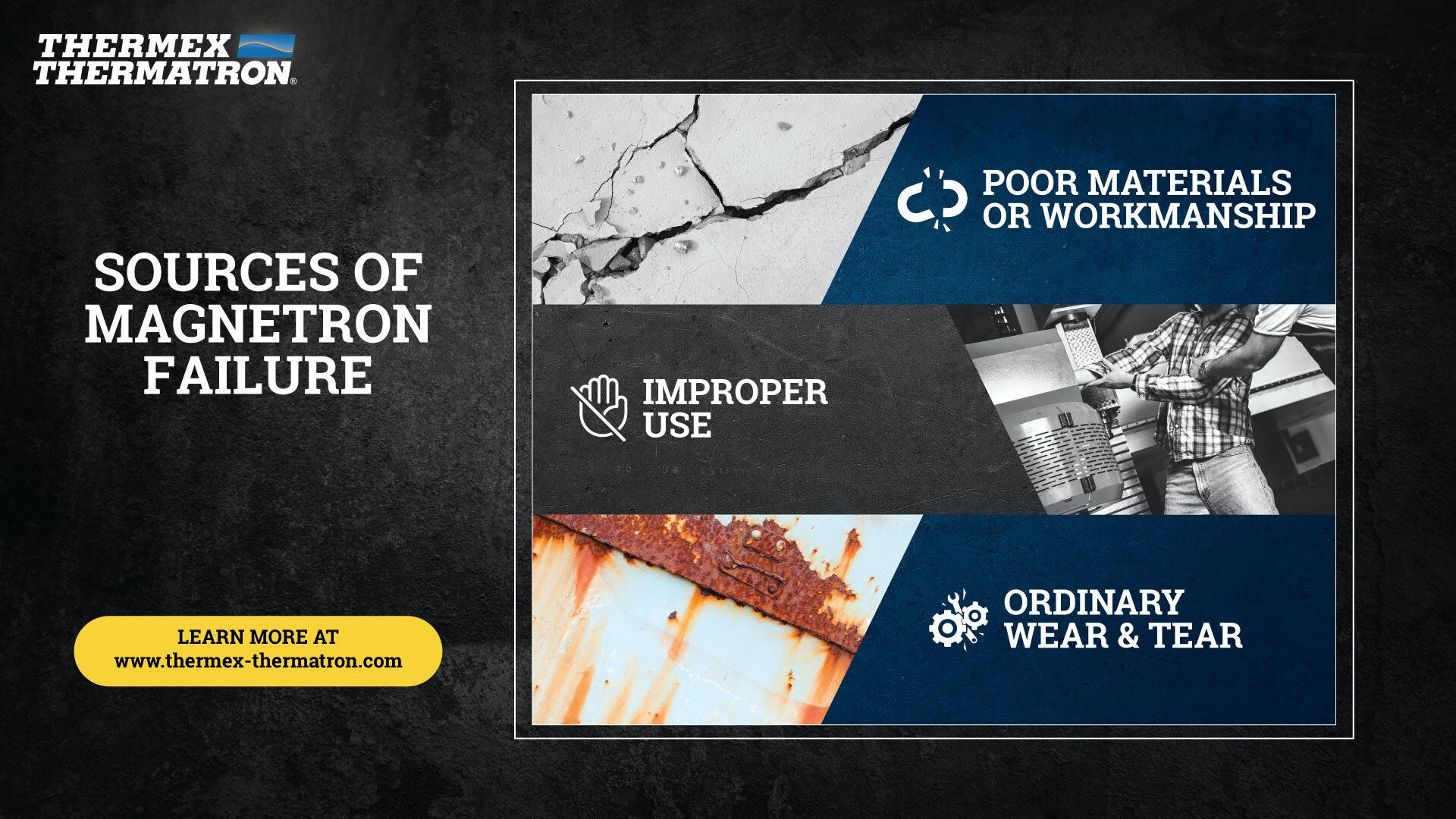 When magnetron tubes are rejected at the initial state of application, generally defects in materials or workmanship or rough handling during shipping can be blamed. However, due to the relationship between the viability of a tube and the surrounding operating conditions, one must also consider the possibility of an operator or other mechanical error.

Improper use indicates problems in maintenance or operation of the microwave generator. Deviations in the operating conditions and environment can impact magnetron life. In this respect, it is very important for both operators and maintenance personnel to keep thorough records of operating hours and conditions and take corrective actions when those deviate from normal.

Sometimes, it is impossible to determine the failure cause with certainty. The magnetron is a consumable item and can be expected to wear out over time, but when lifespans are unexpectedly short, it should be reported to the manufacturer. Prepare for the possibility of returning the product for evaluation by keeping appropriate shipping materials, ensuring that ‘duds’ arrive with the manufacturer in an unchanged condition. This is key, as manufacturers will invariably reject warranty claims for any tube returned in other than original or otherwise approved packaging.

Regardless of the instigating cause, breakdowns occur generally owing to one or more of a well-defined set of 10 causes.

1. DAMAGE TO ELEMENTS — Damage to elements may be related to rough handling during shipping or installation or abuse in operation. Examples: a dented anode jacket, punctured vacuum seals, misaligned filament due to handling by the cathode / filament (stem), operation with incorrect voltages / currents or insufficient cooling (air and water).

2. BROKEN FILAMENT OR HEATER — Generally, the filament or heater has almost no chance to break before termination of life. Instead, vibration or shock is often attributed to broken rejections. For that reason, thoriated-tungsten wire is used in directly heated cathodes. The surface of these are specially treated in order to ensure good electron emission, a process known as “carburization.” The filament or heater also has poor mechanical strength against shock, so the tube manufacturer pays careful attention to the packaging and the shipment. On the user end, one must handle magnetrons with identical care, including reusing the original packing materials for reshipment of the tubes. Handlers should avoid any sharp shock as a result from falling, impact, etc.

The filament connections are subject to a large amount of current required to heat the cathode. If there are poor connections, problems with that current-load can be expected. Poor mechanical contact in the wiring raises the temperature and accelerates oxidation of the contacts. This type of issue is often mistaken for a broken filament or heater; however, in case the filament or heater does not light during the operation, it is necessary to check the connections.

3. DAMAGE TO CERAMICS — Ceramic material is used for both parts of the cathode and the MW antenna of the tube. The temperature of the cathode stem becomes extremely high due to the thermal radiation of the heater. For this reason, certain types of magnetrons specify the maximum temperature of the stem and the lead wires in the specs, and special care for cooling of those parts must be taken. An unusual increase in the temperature may cause damage to ceramic parts.

The slight heating of a MW antenna is acceptable as long as it’s due to MW energy radiated by the antenna while operating under normal conditions. Under the influence of the increased reflection from the VSWR load, however, the ceramic of the MW antenna may overheat and crack. (VSWR = Voltage Standing Wave Radio)

When the anode temperature exceeds the maximum rating, the ceramic part will break down because of overheating. The anode cooling, therefore, must be carefully maintained.

In handling magnetrons, care must be taken to avoid damage to the ceramic parts.

4. DEFORMATION AND ASYMMETRY OF THE FILAMENT — The thoriated-tungsten filament is generally coiled in shape. Therefore, it is easily deformed and can become asymmetric when it receives a series of heat cycles exceeding the maximum ratings. The higher the temperature in operation, the more failures might take place. This potentially leads to a drop in power, an increase in filament current, moding, etc.

5. BURN OUT OF ELECTRODES — When the cooling system of the microwave is able to maintain tube temperature below the maximum ratings, it will not cause burn out of the electrodes. In order to avoid damage to tubes due to trouble in the cooling system, it is always necessary to check the protective circuit’s temperature and flow switches. Special care should be taken to ensure proper cooling of the filament and antenna of the magnetron using forced air via the magnetron blower.

6. POOR VACUUM — Various rejections, such as poor emission or poor insulation at high voltage resulting from degraded vacuum of tubes, usually have one of two causes: discharged gas from the inner electrodes and/or the insulation materials or air leakage. When sealing rejections, like cracks in the ceramics, are observed, the leakage progressively leads to glow or internal arcing. Proper cooling minimizes the potential failures due to decreased vacuum in the magnetron.

7. POOR EMISSION — Rejection due to insufficient electron emission from the cathode will show a sharp drop in the output power and moding during operation. Poor emission is due to residual gas in the tube, improper cathode temperature, etc.

An increase in the residual gas contaminates the cathode and quickly deteriorates emission quality. Excessive cathode temperature also contributes to poor emission from excessive evaporation. Cathode temperature that is too low, on the other hand, not only produces insufficient electron emissions but also represents temporary degradation of the thoriated-tungsten filament.

The filament or heater voltage must be maintained within the specifications. This care is especially critical because the cause of emission rejection is typically deceptive (e.g., poor contact, increased resistance of filament circuit). Additionally, variation of the supply voltage leads to excessive anode current, which shows the same phenomenon as emission failure. It is advisable to minimize any potential changes in the supply voltage greater than 2.5%.

8. DROP IN OUTPUT POWER — The cause of this rejection is not always related to the drop in the emission. Sometimes the cause is secondary electrons ejected from the cathode by back bombardment, which also contributes to the emission during operation.

The major reason for the drop in the output power is in the decrease of efficiency. This is usually due to deposits from the cathode or other parts creating increased surface loss in the cavities. Another potential cause is a disturbance of the interaction space, which results from the easily-deformed form and asymmetry of the thoriated-tungsten filament. The higher the temperature, the more evaporation, deformation, and asymmetry of the cathode are observed. It is imperative to take care to monitor and avoid this.

9. MODING — Moding occurs when the MW electric field inside of the tube can no longer maintain the oscillation in-mode. This is often due to the disturbance by the reflected waves from the load that causes an unusual oscillation. Insufficient electron emission from the cathode also discontinues the in-mode oscillation, which gives rise to moding. In order to avoid this, the operator of the microwave is advised to check the operation of the circulator. Additionally, the manufacturer’s advice should be sought regarding the load impedance, reflection from load, load variations, etc.

10. RUNAWAY — Generally, when a magnetron is operated with a larger reflection in the off-sink phase, the tube can no longer control the electrons in the interaction space because of the increased temperature in the electrodes. This causes the anode current that does not contribute to increased oscillation. The phenomenon is referred to as “runaway.” Large magnetrons are protected from reflected power by a circulator and water load, so this will primarily be a concern for smaller magnetrons.

HOW TO GET MAXIMUM SERVICE FROM YOUR MAGNETRON

It is necessary to understand the possible causes of magnetron failure in order to get ahead of the risk. From choosing a reputable magnetron vendor to carefully handling and inspecting each magnetron shipment, your production can continue on schedule with minimal magnetron failure. 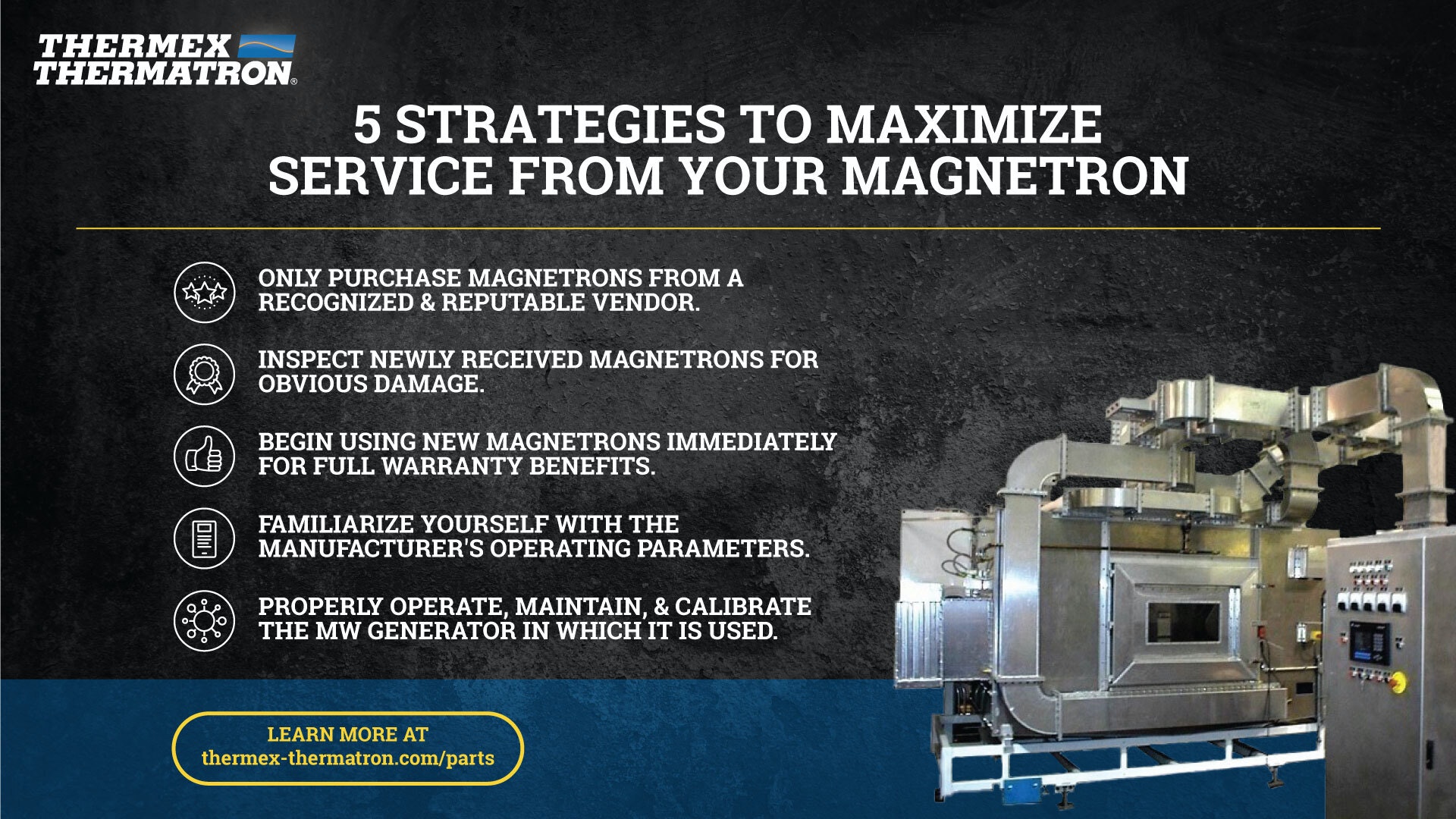 Thermex-Thermatron is a leader in microwave systems and has the experience you need to optimize system functionality and lengthen its lifespan. We offer reliable magnetron parts and support, including magnetrons and magnetron connectors. 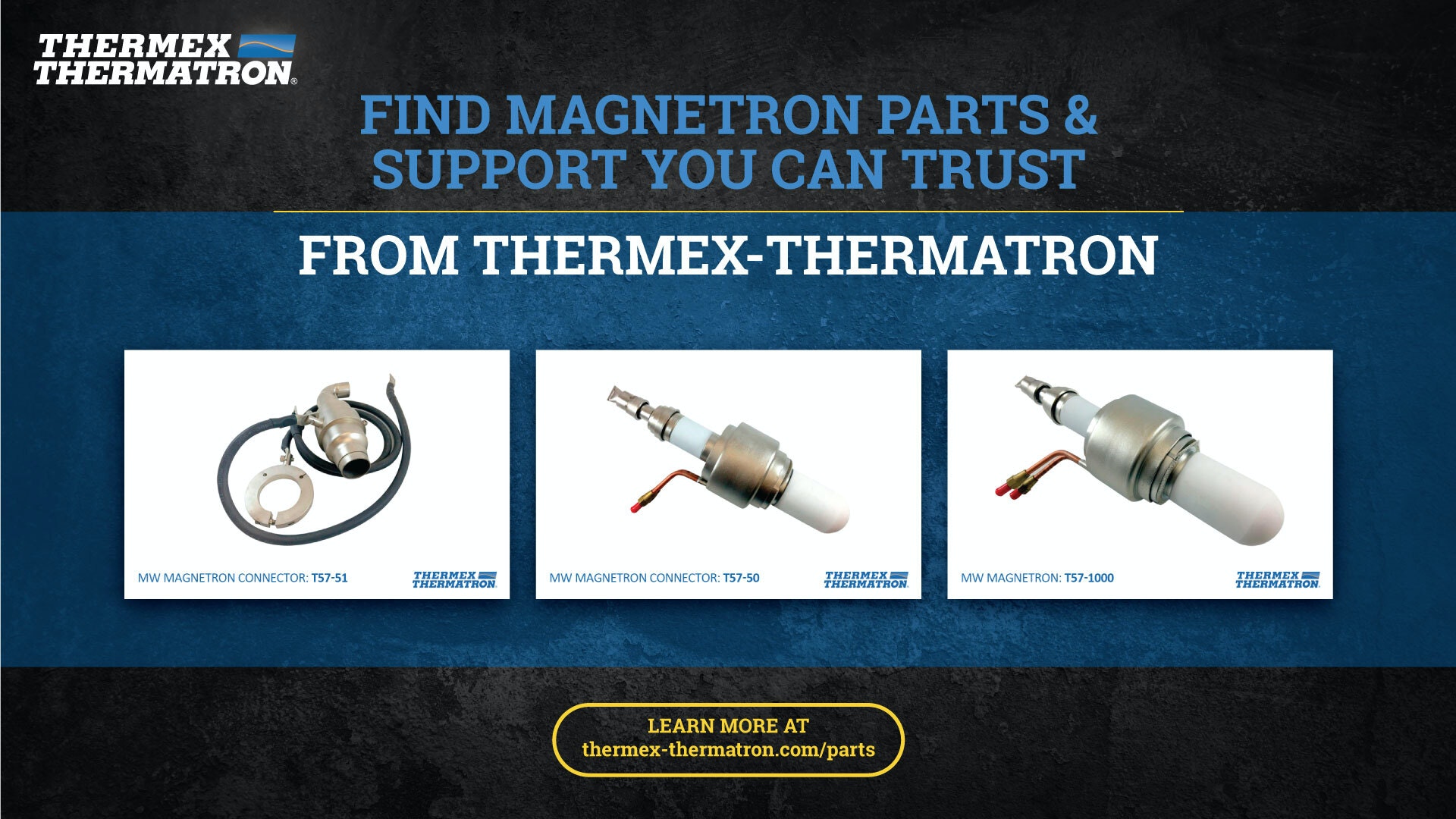