How to Intelligently Use an Arc Suppressor: Save Time and Equipment on the Production Floor
Thermex-Thermatron Systems

When using high frequency dielectric heat sealers, it’s critical to have the right equipment to confront production challenges, so you don’t risk the price of overheating. Arcing leads to a breakdown in dielectric materials, leaving your equipment as well as your materials exposed. Thermex-Thermatron created the Arc Suppressor as an electronic protective device. Intelligent use of this Arc Suppressor will help you avoid costly damage to your equipment while saving you valuable time.

The Technology to Act Immediately to Curb Electrical Instability

Intended for use with Thermex-Thermatron high frequency dielectric heat sealers, the Arc Suppressor is an integral part of the generator, mounted inside the cabinet. During normal operation, the material being heated becomes more and more electrically conductive, until a point is reached when an arc can occur. Thermex’s Arc Suppressor has the capability to sense when the conductivity either has reached or is set to hit this arcing point. Understanding How the Arc Suppressor Safeguards Your Equipment

The Arc Suppressor applies about 125 Volts DC across the work electrodes. Virtually no DC flows through when the electrodes are closed on the material being sealed. As the material becomes heated, its ability to conduct rises.

When this current reaches or exceeds a definite level, it’s possible to adjust the sensitivity of the Arc Suppressor accordingly, so as to shut off the sealing power. If that level is properly set, the power will shut off at the completion of a normal seal. The continued heating of the material beyond the point at which a seal takes place could cause an arc to occur. This is when the Arc Suppressor preventatively acts. Sometimes, the time it takes for a normal seal to complete can trigger a current flow in excess of the adjusted level. Before this accidental occurrence of an arc can take place, the sealing power is rapidly removed with negligible die damage.

Important Factors to Consider When Adjusting an Arc Suppressor

The adjustment of the Arc Suppressor depends upon several factors, including: 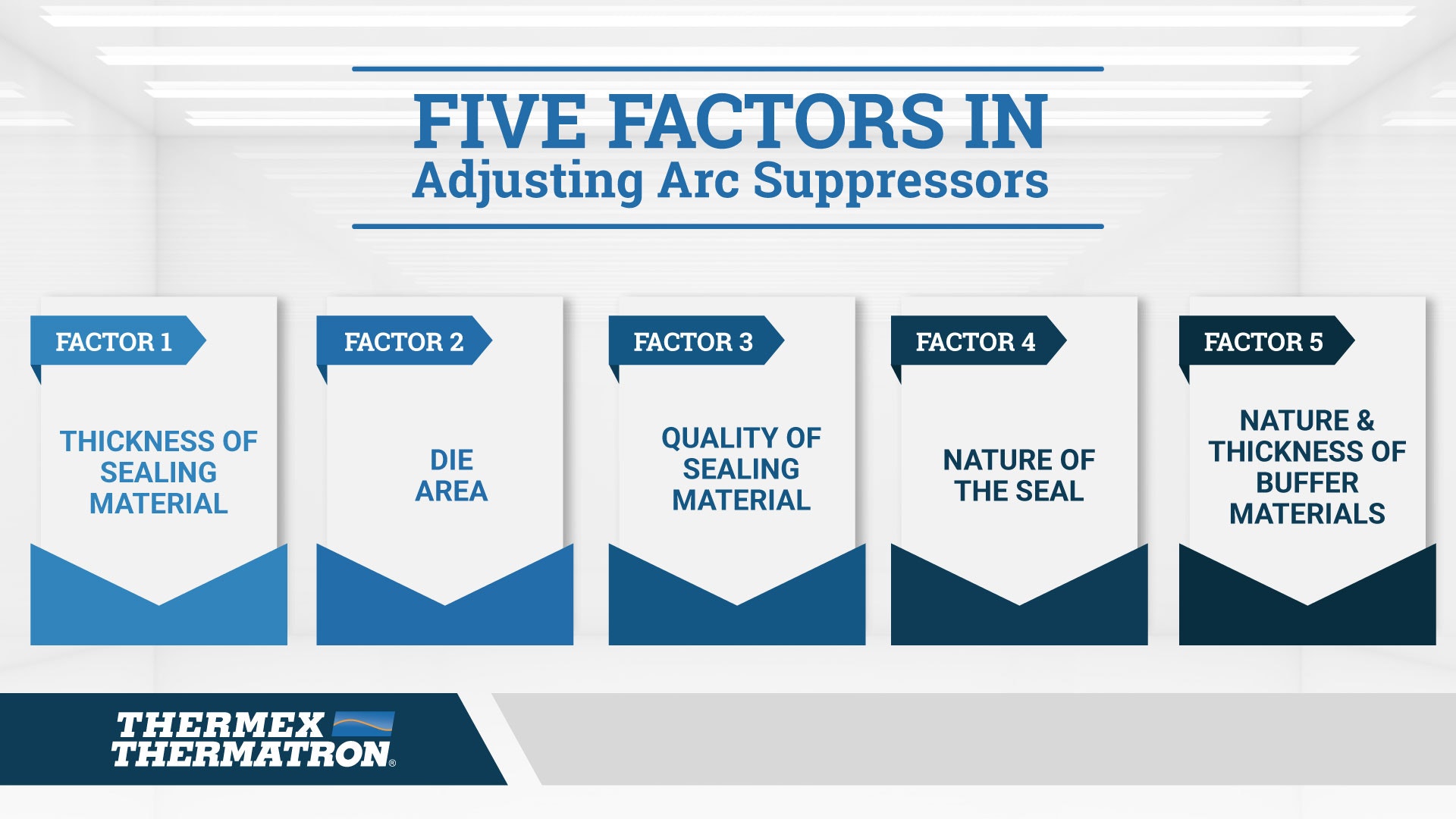 The Model AS-5 Arc Suppressor has a high level of available sensitivity. It’s possible to adjust that sensitivity over a broad range, accommodating a great variety of sealing operations. In general, here are three beneficial rules to follow:

These Tests Ensure Your Arc Suppressor Is Set for Sealing Operations

Thermex-Thermatron designed this protective tool with an audible buzzer, ready to signal that the imminence or occurrence of an arc has called the Arc Suppressor into action. The buzzer will proceed to sound when the Arc Suppressor acts, persisting for the duration of the sealing cycle. At the close of the cycle, the Arc Suppressor’s buzzer will go off automatically. It’s possible to then immediately perform the next seal.

Now, you can insert the work to be sealed. Adjust the sealing timer and power control to those settings, which experience suggests are appropriate for the particular operation. Set the sensitivity control to maximum clockwise. Now, you can bring down the press, attempting to perform the seal. The Arc Suppressor should act immediately or very early in the sealing cycle. If it does, and you see the seal looks incomplete, rotate the sensitivity control slightly counter-clockwise. Finally, replace the material and repeat the process. Sometimes, the sealing timer or the plate current limiting meter terminates that cycle before the Arc Suppressor acts. If so, and the seal is not completed, you must change one of the following: the original power, the plate current, or the timer adjustment. If more power is available, increase it. If not, you must increase the sealing time. Make the indicated adjustments, and if necessary, readjust the Arc Suppressor sensitivity control.

Watch Out for These Conditions in a Sealing Cycle

When all adjustments are properly made, the sensitivity will be set for the maximum position. This allows you to obtain a satisfactory seal within the adjusted sealing time — without the Arc Suppressor being called upon to act. However, on those occasions when the imminence of an arc is sensed, the Arc Suppressor will be required while performing a seal. This condition may occur if you complete a seal before the completion of the timer cycle.

Increased line voltage can lead to a surge in sealing power, which in turn can result in a seal’s early completion. Additionally, early completion of a seal can be due to one or more of the following:

On those occasions when the Arc Suppressor acts, damage to the die will either be slight or non-existent. Nonetheless, occasionally, carbonization may appear on the die or buffer. Before continuing to seal, it is advisable to clean the die and move the buffer. This way, you avoid the carbonized area falling beneath the seal. When a sufficient number of test seals have been performed, indicating that all adjustments are proper, you can lock the sensitivity control and proceed.

The Consequences of Not Using an Arc Suppressor

An Arc Suppressor may be completely removed from a Thermatron sealer without affecting the actual seal quality. Nonetheless, operation without the Arc Suppressor is strongly discouraged. Even when sealing the best quality vinyl or urethane, there will be an occasional imperfection in the material that will result in an arc. If there is no Arc Suppressor, severe die damage may result from such an arc.

Safely Use an Arc Suppressor to Enhance Fundamental Processes

It’s crucial to understand how to properly operate an Arc Suppressor. Otherwise, you face losing efficiency on the production floor, leaving valuable equipment and materials vulnerable to hazardous accidents. Thermex-Thermatron’s knowledge as a leader spans multiple industries, making it possible for better engineered products in addition to a reduction in dangerous working conditions.

For JTE, FIAB, and Oteman inquiries, contact our Director of Business Development, Traci Evling (traci@thermex-thermatron.com or 904/662-2169).